The problem with chocolate, as we all know, is how bad it is for your health and your waistline. Right?

Chocolate was used medicinally for centuries in Europe and for millennia in South and Central America. The problem with chocolate is what we’ve done to it. What we’ve turned it into. Well, that stops here.

It’s time to, once again, accept that chocolate is a medicine and start treating it with the respect it’s due.

The first step on this journey is understanding where chocolate comes from and, thus; what chocolate actually is. 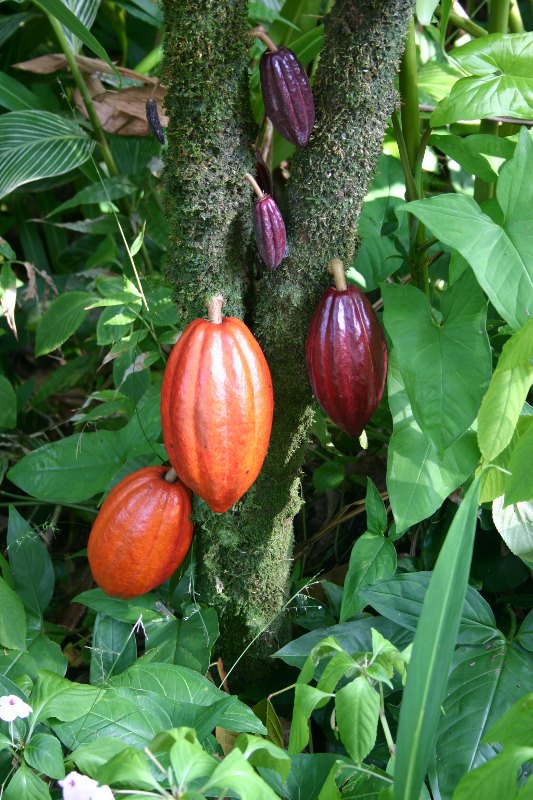 Chocolate comes from the seeds of the fruit of the Cacao tree. The seed of the Cacao tree, is a seed in the same way as an almond, a pistachio or a walnut, is a seed. Which is to say; it’s basically a nut. Which is already great news, because chocolate is made from nuts, and eating nuts is good for you.

Admittedly, the best way to eat nuts is in their raw, natural state and we tend to consume chocolate in a more… processed format. But it’s still definitely a step in the right direction.

But, anyway back to the process of getting the chocolate from the *ahem* bean. More good news: this first part is all natural and organic.

The fruit is harvested and opened up, to look something like this: 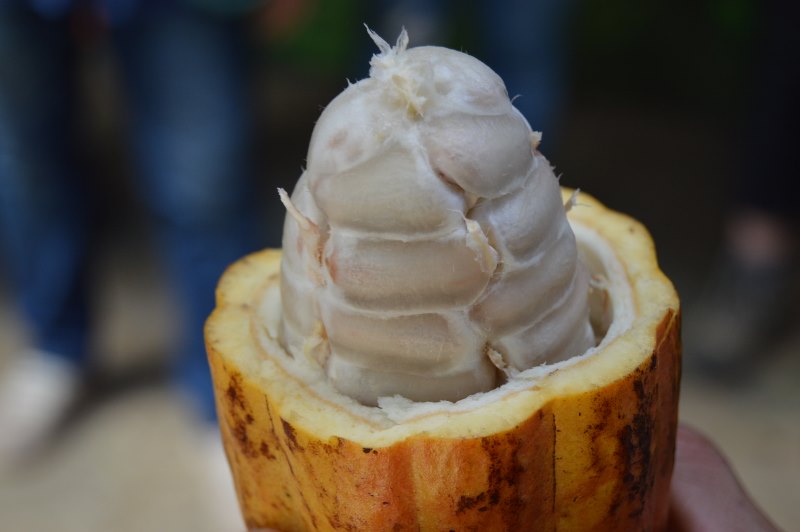 While the white stuff is actually edible, the whole mess is scooped out into bins, or piles, covered up and left to ferment for up to a week. After that, the beans are spread out and left to dry in the sun for another week.

Next, the beans are cleaned and dry roasted. 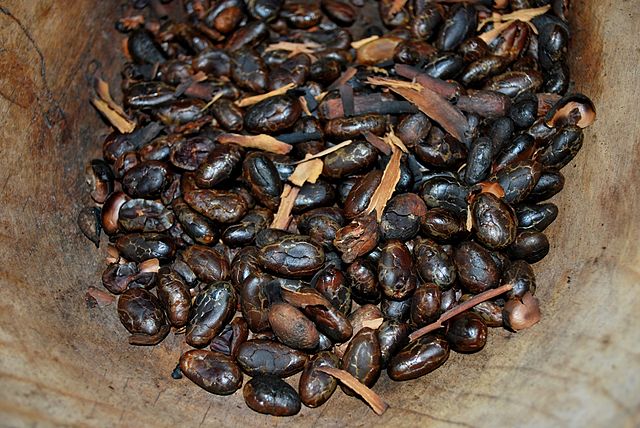 The roasted beans are then shelled to reveal the nibs. The nibs, for some reason, are referred to and sold as both Cocao Nibs and Cocoa Nibs, even at the same supermarket. Presumably just to annoy me. But, anyway, they’re no more processed, at this stage, than roasted almonds.

(It also seems possible to get hold of raw cocao nibs, that have been dried but not roasted. And, in fact, have never gone above 42°C. Given that one of the purposes of the drying process is to stop the growth of mould, following fermentation, I think I’d prefer my nibs to be thoroughly roasted.)

And good for you!? The world can’t get enough of the health benefits of the Superfood that is chocolate nibs. I’ve included a link to an article that lists 21 benefits of Cacao nibs. But I couldn’t bring myself to read it, because it’s on a site called Daily Superfood Love. And it’s got a cute little heart as its site icon. And a man can only take so much…

So, there you are: everyone agrees that chocolate is wonderful and makes the world a better place. Except for one little thing. The problem with chocolate, at this point, is the taste.

There is a theory that the word chocolate is derived from the Mayan word, Xocolatl. Xocalatl means, bitter water. And, although other theories of the derivation of chocolate exist, everyone agrees that cocoa, cocao and chocolate nibs are very bitter.

And this is where the additional processing comes in. The nibs are ground into a liquor, which is then pressed to extract the cocoa butter. What is left is known as the cocoa solids. The cocoa solid is fairly acidic, so is further processed, through alkanisation, to reduce bitterness and increase solubility.

In order to make chocolate, as we understand it, the solids need to be blended back with the butter. The 100% dark chocolate, is just that; cocoa solids with just enough cocoa butter to hold it together in a bar.

The lower the percentage of cocoa, the higher the percentage of sugar, initially, and then sugar and milk. And that’s in the quality products. Cheaper products will replace cocoa butter with some form of vegetable fat. The reason for that is that real cocoa butter is highly sought after by the cosmetics and pharmaceuticals industries, making it too expensive for some chocolates. Yeah, I’m looking at you, Cadbury’s!

And, seeing as we’ve arrived at Cadbury’s, let’s have a look at the nutritional information of their Dairy Milk Chocolate Bar: 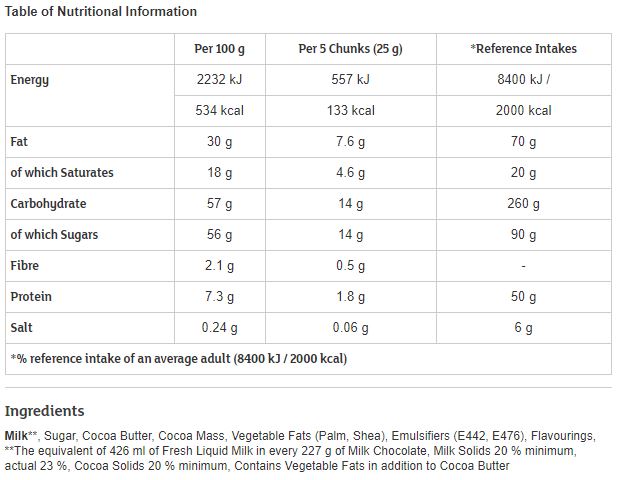 The problem with chocolate in Cadbury’s Dairy Milk: it only makes a fifth of the bar…

So the ingredients are:

And the sharp eyed will have noticed, in the ingredients, ‘Contains Vegetable Fats in addition to Cocoa butter’. Classy!

And that is the problem with chocolate, right there: the lack of chocolate in our chocolate.

And, this next bit is going to sting:

The Europeans, in particular the French, have been on at us, about this, for years. And they’re right: we’re not eating chocolate; we’re eating sugar. Would it not just be simpler to make boiled sweets and add a chocolate extract, for all the benefits of the chocolate we’re actually getting?

Is it just me, or is anyone else tempted to try that now…

It’s also what we, as adults, need to move away from, to solve the problem with chocolate. Ideally taking our kids with us. And educating them from a young age to eat smaller quantities of healthier chocolate. Maybe helping reduce the obesity crisis in the process.

It’s funny how tastes tend to refine as we age. I imagine that people who started their lives drinking Black Tower or Blue Nun wines are no longer doing so. As they aged, their tastes refined and they started drinking, well, better wines.

For a lot of people, the same might be said to be true for beer. Start off by drinking whatever the cheapest available lager was. And then, over time, develop a taste for craft beers and ales. Potentially, the same principle applies when moving from instant coffee to filter coffee. My point is; tastes develop and refine with age.

Except, it seems, when it comes to chocolate. We’re still favouring the same sugary mess that’s practically designed to get children hooked. Maybe it just worked too well. Possibly it needs a conscious effort to move on. Perhaps there needs to be a benefit. Like a health benefit…

The difference is that a serving of a 70% dark chocolate is usually marked at 20g, and it means it. The 200g of Cadbury’s Dairy Milk will say things like, ‘perfect for sharing with the whole family’ and will tell you that, ‘5 chunks is 25g’, but the reality is that it’s all too easy to blow through the whole bar in the course of a film, on your own. Or is that just me…?

The thing is that 20g of 70% dark chocolate feels like enough. Whereas, I don’t thing there’s ever enough Cadbury’s Dairy Milk. But, from that 20g of dark chocolate, almost like a dose of medicine, it’s just possible that you might get some health benefits.

Chocolate was being consumed by mesoamerican peoples of Central America well over 2,000 years ago. When chocolate first came to the attention of the Europeans, around the 1500s, they were told that it was used medicinally. When the Europeans took it home with them, it was certainly used as a medicinal supplement. At least, to start with.

You see. what the Americas didn’t have much of, was sugar. They flavoured their bitter chocolate water with chilli, of all things. Like that’s going to help! Yet they still drank it for its invigorating effects.

Europeans, though, had sugar. And then they spent centuries arguing about what, if any, the medicinal benefits were, presumably, all the time going, ‘Nom, nom, nom’. The church even got involved. 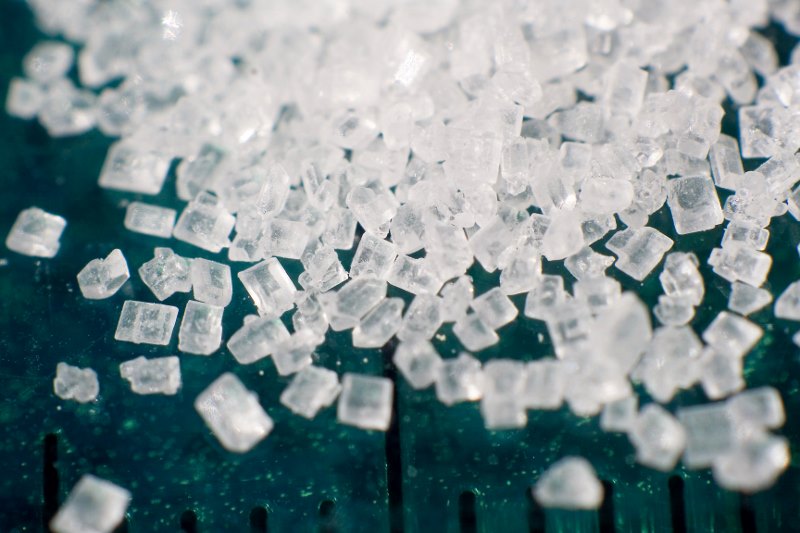 And then the Dutch started a revolution. They came up with a press to separate the solids from the butter and created Dutch Cocoa.  And then a chap called Fry, working out of Bristol, developed the idea of mixing sugar into cocoa solids and cocoa butter, and invented chocolate bars. These bars turned out to be strangely popular.

And then the Swiss stepped in, and a guy called Nestlé perfected the process of adding milk powder to the mix. Finally, another Swiss inventor called Lindt got involved, and refined the process to roughly what we have today. This all happened before 1880.

Until this point, one of the medicinal purposes of chocolate, that everyone agreed on, was that it helped people gain weight. For the malnourished and the recuperating.

Unfortunately, as chocolate became cheaper and more available and was filled with more and more additives, this is what it started to do. Just not medicinally. Chocolate went from being thought of as having health benefits to being known as a cause of obesity.

But, again, the problem with chocolate wasn’t the chocolate, it was what was added to the chocolate. And the quantity of this mixture that was being consumed.

Which brings us to now. When the problem with chocolate is that it’s so associated with obesity, that it seems implausible that health benefits can exist.

The reality is, that while there seems to be some hard science behind some of these claims, others appear somewhat anecdotal. There are plenty of other positive health benefits mentioned on various other sites. Enough to make me think that there are genuine health benefits to be had from eating 20g of dark chocolate.

Not least of these benefits are the ones I’ve personally experienced:

Photo by henry fournier on Unsplash

Seriously, there are different types of beans, different countries of origin, different soils; they all impact on the flavour. There’s even a recognised way to ‘eat’ the chocolate, to fully appreciate its characteristics. You place the square on your tongue and let it melt; only then can you get full access to the flavour profile.

No, seriously, the possibilities are endless. There are so many artisan chocolate producers now, both at home and at each country of origin. Can’t you just hear yourself saying something like, ‘Well the 70% Venezuelan is very nice, of course, but you haven’t lived until you’ve tried the 71% Madagascan…’

Why Listen to a Fat Guy About Dieting?

Is Owning Music The Way of The Future?