March has been a tricky one from the exercise point of view. My knee still hasn’t recovered from the injury I picked up during our skiing holiday, as I mentioned in last month’s weight loss update. Despite this, and I’m not entirely sure how, I’ve managed to achieve some good weight loss success in March.

As such, my weight loss success in March was another 11lb (5kg).

Now, I accept that March is a long month, but I wasn’t able to exert myself or play hockey at all. For the most part, I decided to be sensible and simply rest my knee and let it get better. I expected this to have an impact on the amount of weight I would lose each week but, for the first couple of weeks, it didn’t.

This was making me increasingly nervous because I couldn’t make sense of it. I was sticking to my diet but, without the exercise, my weight loss should have halved, at least. I was forced to conclude that there must be some muscle wastage going on. I mean, by March 18th, I’d been completely inactive for virtually a month.

Actually, thinking about it, I did have a colonoscopy on the 13th. That probably helped a little bit…!

Then, on March 25th, the inevitable pigeons came home to roost. I didn’t lose any weight. I remained on 17st 2lb, the same as the week before. The first time in three months that I hadn’t lost any weight. And a really dangerous moment…

I know they get a bad rap but I’ve always kinda liked pigeons.
Photo by sohel yousuf on Unsplash

I can’t count how many diets have ended because I’ve plateaued and stopped losing weight. Thankfully, the two bowls of porridge each day meant that I wasn’t feeling hungry all the time. There are few feelings worse that feeling hungry for a whole week and then not losing any weight at the end of it.

Because my knee was taking so long to heal, I’d been to see my Doctor on the 12th March. He said he’d send me for an ultrasound and look into getting me some physiotherapy, which was nice of him. I’d been expecting to be told it’d clear up in a couple of weeks and to take a couple of aspirin in the meantime.

The appointment for the ultrasound came through really quickly, I had it that Saturday. I was told that my knee looked fine, which was pretty reassuring. A couple of days later I got a letter through, inviting me to go online and book some physiotherapy. The letter included the news that the average wait for said physiotherapy was 61 days. I figured that my knee was bound to be fine after 61 days, so tossed the letter aside.

Yeah, that changed on the 25th, when I was no longer losing weight. I figured that if I was going to be plateaued, I’d better have a plan, so I logged on to book an appointment. Needless to say, there were no appointments in the whole of the month of April and only a few left at the end of May. There was, however, one lonely looking appointment for the 28th March at 1:30pm. This was only three days hence. It must have been a cancellation, and now it was mine. Mwa ha ha haaaa!

Regardless of how soon the appointment was, I wasn’t willing to wait; I needed to start exercising immediately. So I came up with a new routine, which I started that day:

I don’t actually have a barbell yet, but when I get my knees right, watch out…
Photo by Victor Freitas on Unsplash

In an ideal World, each weight training session would have been a whole body workout. But I couldn’t do anything to risk my knees, which ruled out Deadlifts and Squats. I also ruled out Sit Ups because that would also have pulled across my knees… Well, that and the fact that I hate working my Core.

So the weight training I settled on was:

[I do Supersets with the Press Ups and Pull Ups, and with the Shoulder Press and Rows]

When I’m feeling braver I’ll introduce another four Supersets of Weighted Hip Thrust and some sort of Abs exercise that’s easy on the knees. But not yet… not yet!

I have chosen to go heavy (for me) with my strength training, including doing four sets of each exercise. The reason for this is that conventional wisdom tells you that you can’t put on muscle while running a caloric deficit. Which is to say, you can’t actively build muscles and diet at the same time. So I’m going to try and find out if this is true.

The other alternative is to do two sets of lighter weights but with higher repetitions (reps) in each set. For example, two sets of 20 reps for shoulder press, using 8kg dumbbells. And this would be fine. It would prevent muscle wastage from the caloric deficit of the diet. But I’m a curious soul, so I’m going to use heavier weights and see if I can actually increase my muscle mass. And I’m not going to increase my protein consumption while doing so.

The logical way to help to build my muscles, while dieting, would be to take on more of my calories in the form of protein. But I don’t want to do that either. I’m just going to eat my normal meals and see what happens. To be fair, each bowl of porridge I eat includes 15g of protein. And my evening meals will all include meat or eggs, so my diet naturally includes a reasonable protein intake. I’ll let you know how it goes, which probably means I should start taking flexed body measurements… 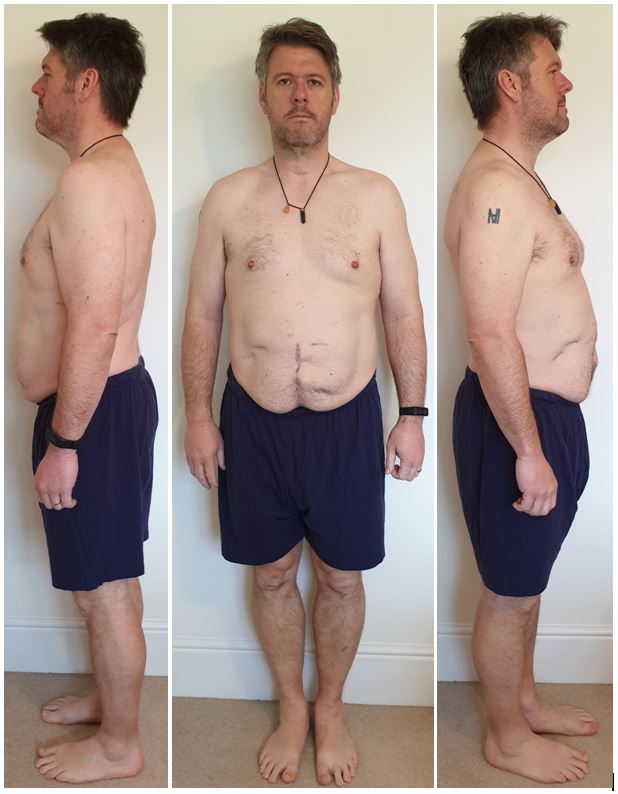 Even with my weight loss success in March, any muscles I might have are staying well hidden.

But muscle measurements are something to get more involved in next month. Right now, I need to get back to the appointment with the physiotherapist.

I went to see the physio more or less straight from the swimming pool. She checked me over and identified a couple of postural issues but was happy with my stretch and range of motion. She said that the issue was not the Quadriceps Tendinitis, that I’d thought it was. Instead it was wear and tear to the underside of my knee cap. The bad news, she said, was that it wasn’t a quick fix. The good news was that it would get better. Then she gave me a series of things she wanted me to do before she saw me again, four weeks later:

Now, I have a rowing machine and a bike, but that still seems like an awful lot of activity to do every day. So far, although I’ve done the other stuff, I haven’t been on my bike yet. Mainly because the weather has been pretty rubbish. Besides, I’m going out for a ride with my Dad on Sunday, so that should get the ball rolling. And while my knee still isn’t right, it has improved markedly. Just goes to show: you should do what your physioterrorist tells you.

Anyway. all this extra exercise helped, and I managed to lose another three pounds in the final week to bring me under the 17 stone mark for the first time in a loooong time. And while this is a good weight loss success to have reached by March, it’s not enough. I still have plenty of weight to lose. I’m still motivated to keep the weight loss success going for as many months past March as I can manage.

Which is just as well, because I need to cut my food intake again. And this is because when I put my new weight, of 237lb, and my current activity level, moderate, into the Calorie Calculator, I get a daily limit of 1,928 calories, to achieve extreme weight loss. The ‘extreme’ label relates to a projected weight loss of 2lb a week, which doesn’t seem excessive to me.

This new level of 1,928 calories naturally impacts on the amount of food I’m able to consume, so I need to reduce it accordingly. As ever, I’ve allocated half of my total calories to my evening meal, which is my main meal of the day. The rest is shared equally between the two bowls of porridge I have. This means that each bowl of porridge must be no more than 482 calories.

As my weight is 237lb, and in line with the notes of how I calculate the proportions of my porridge meals from my original weight loss diet plan past, I ended up with this:

This comes in at 460 calories. which is fine as it allows the slack needed to offset the Fruit Pastilles ice lolly, with which I finish each day. Oh, how I spoil myself… 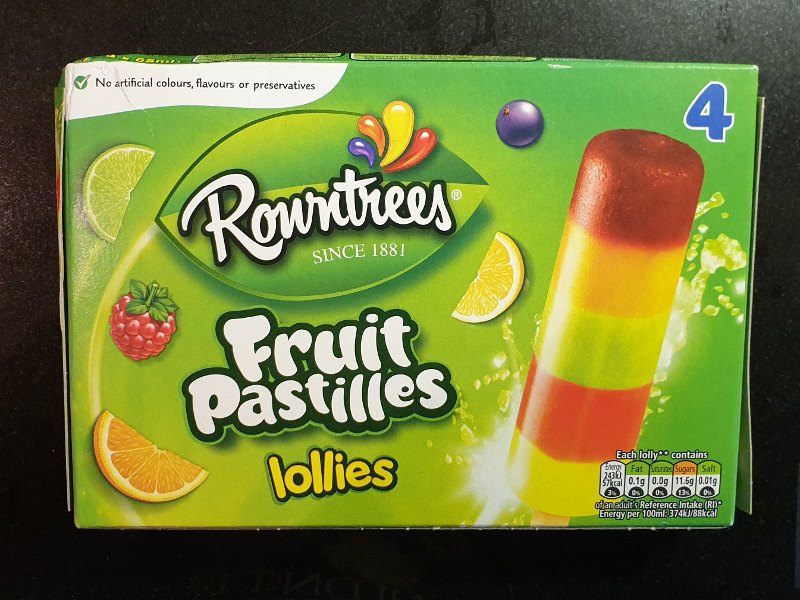 My little treat each day.

Now, given that I started this diet plan eating porridge meals based around 60g of oats, this new meal size represents more than a 10% reduction. This is also reflected in the reduction of my body weight, from 271lb on 31st December 2018, to 237lb today. That’s a loss of 12.5%… I hadn’t realised that. That’s an eighth of my body weight!

Okay, I’m pretty chuffed with that.

Especially given that at one point, at the end of my last chemotherapy treatment, I weighed more than 300lb (21st 7lb, 136kg).

But, it’s not all about weight, there are other ways to record weight loss. To which end, I’d better take my current set of body measurements:

Okay, so it seems that everything’s got a bit smaller. That can only be good news, right?

To be honest, I’m not sure what to do with this information. I get that it’s all heading in the right direction but I don’t know how to use this in a meaningful way. Or even if I’m supposed to… Well, that’ll be something that I can look into for next time.

Oh, one other thing to mention before I wrap up. I was away for a weekend in Birmingham during March and, in order to maintain my weight loss success, I had to get creative. Because we were staying in a hotel on Friday and Saturday nights, I couldn’t use the camping stove trick I used while we were skiing. Instead I cooked a couple of extra batches of porridge, put them in Tupperware containers, and took them with us.

I had one on the Friday night and the other on the Saturday night. It turns out that if you leave cooked porridge in a container for any length of time, it takes on the taste and consistency of Bread Pudding. 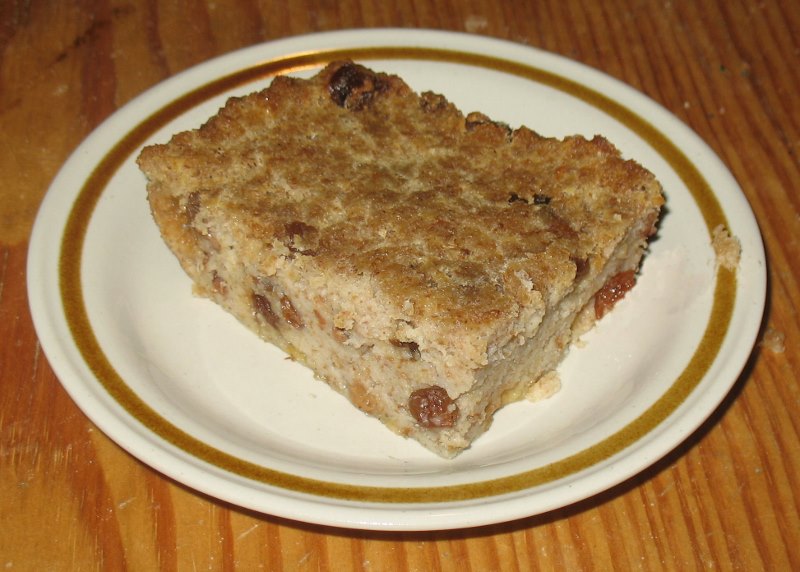 Thankfully, I like bread pudding. Seriously, I’m actually thinking of doing this a couple of times a week, just to ring the changes, When I do, I’ll take a photo because it’s a sight to behold.

In the meantime, I must say that I’m very happy with my weight loss success for March. I lost far more weight than I expected to and am interested to see what April will bring.

Is a Cruise Holiday Any Good?